Maybe my story is not so dissimilar from your own? And maybe you still don’t really know what goes on each cycle? Let me tell you now, that you are forgiven! No matter where you are in your cycling years, I believe it’s never too late to learn about your body and menstrual cycle.

This article is a bit of a semi-comprehensive guide to learning about your hormones and the phases of your menstrual cycle so that you have a better understanding of your body.

So let’s start off with defining what a menstrual cycle actually is.

The term menstrual cycle refers to the entire cycle, from the first day of menstruation (aka your period) to the day before the next menstrual bleed begins. The menstrual cycle is so much more than having a period each month. In fact, it’s not even the main event of the cycle. Ovulation is. The reason why we even have a period is as a result of ovulation taking place in the previous cycle – and where conception did not occur.

The menstrual cycle is governed by a series of hormones released from the brain and ovaries that cause a sequence of physiological changes and make up the four phases of the cycle.

There are two main phases, or two halves, that make up the menstrual cycle.

The first main phase or first half of the cycle is the follicular phase, which begins on the first day of menstruation and ends with ovulation. During the follicular phase the ovary is stimulated to produce multiple follicles, where one dominant follicle will go on to mature into an egg and release at ovulation.

Ovulation is the event that divides the follicular phase and the luteal phase.

The second main phase or second half of the cycle is the luteal phase, which begins the day after ovulation and ends the day before next menstruation. The length of the luteal phase averages around 12-14 days (but can range between 11-17 days).

This phase can be shorter, however, anything under 11 days is considered a ‘short luteal phase’ and does not allow a fertilised egg to implant into the uterus for pregnancy. On the other hand, if the luteal phase is 18 days or longer, it is an indication of pregnancy. During the luteal phase, the corpus luteum (a hormone-producing gland that was the egg’s follicle prior to ovulation) releases the hormone progesterone to support potential implantation of a fertilised egg.

The 4 Phases of the Menstrual Cycle

* Menstruation, also known as menses, menstrual bleed, or your period, is the release of blood from the uterus. The menstrual fluid contains blood, cells from the uterine lining, vaginal secretions, and cervical mucus.

The pre-ovulatory phase begins when menstruation ends and lasts until the beginning of the ovulatory phase. This phase is all about FSH continuing to mature and grow the selected follicle and egg in preparation for ovulation. This follicle then starts to produce oestrogen and releases a burst of it into the bloodstream. Oestrogen’s role in this phase is to start rebuilding the lining of the uterus.

The continual increase in oestrogen triggers the production of fertile cervical mucus. This typically is the beginning of the ovulatory phase and is the phase when you are fertile. Before ovulation* can take place, oestrogen will need to send a signal to the pituitary gland to release LH and more FSH. LH gives the follicle a sudden growth spurt, the egg will detach itself from inside the follicle, and the follicle will swell and burst open releasing the egg. Ovulation has now taken place.

The egg has a lifespan of 12-24 hours and must be fertilised in that time for conception to occur. If unfertilised, the egg will die. If fertilised by sperm, the two merge together and for the next 4-5 days the cells of the fertilised egg will continue to divide and travel towards the uterus.

* Ovulation is the release of a mature egg from the ovary. It is typically a one-day event.

The post-ovulatory phase begins a few days after ovulation and lasts for the remainder of the cycle, right up until the day before next menstruation. Progesterone dominates in this phase of the cycle, as the corpus luteum produces and releases this hormone once ovulation occurs.

As the egg makes its way into the uterus, progesterone will continue to thicken the uterine lining and ensures the lining stays put to support implantation of the fertilised egg. If fertilisation has occurred this cycle, the fertilised egg will travel through the Fallopian tube and into the uterus. If fertilisation does not occur this cycle, the egg will dissolve and the corpus luteum will start to disintegrate and stop producing progesterone. From there both progesterone and oestrogen levels will drop, causing the uterine lining to shed and the next menstrual bleed will begin.

The post-ovulatory phase is also referred to as the premenstrual phase, as this is where you may experience symptoms of PMS (premenstrual syndrome).

So there you have it, the menstrual cycle! If you made it here and read the entire article, bravo to you! I hope that you can walk away with a little bit more knowledge about your body and maybe even feel empowered about what you now know about your menstrual cycle. I support women to understand and nurture their cycles and bodies for better periods and body literacy.

Here you will find a collection of articles on topics I am most deeply passionate about on all things menstrual health and fertility awareness. Enjoy!

Receive digital letters and access to the Wellness Library. 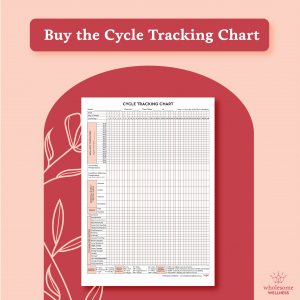 ✨ TEMPDROP IS HAVING A SALE ✨⁠ ⁠ To celebr

Did you know that your basal body temperature (BBT

Your period isn’t just something that happens ev

Spotting 1-2 days before and after your period is